The next few days Jules and I spent surfing and sea kayaking.

The sea kayaking you have to do in groups, as its against the law to hire them without a guide in NSW due to the strong currants and (sharks – eeek). It was quite rough when we started our tour and we had to battle past the waves – which left me feeling a bit like Chuck from Cast Away.

We spent about 2 hours kayaking around the bay searching for Dolphins and Turtles.

Mid trip we gathered in a group and Jules decided it was a good time to ask our fellow kayakers if they had heard about the Great White Shark attack which happened a few years back at Julian Rocks dive site (which we must have been about 100m from!) – I seriously do not know what goes through his head sometimes!!

Anyhow, we manage to spot the Pod of Dolphins and spent about 15 mins watching them playing in the waves. State law says you have to stay 50m maximum away from Dolphins and Wales, so we didn’t manage to get any decent photos – sob.

We are on the left

For surfing, we got lessons with Black Dog (the surf school has a black dog called George who happens to be able to surf backwards – hence the name). They keep groups small and personal and only surf in Byron Bay vs other surf schools.

Both days we surfed at The Pass which is a incredible right hand point break just under the Lighthouse. We saw Dolphins on the first day when out on the boards which was super cool. The waves were about 2-3f which was perfect for me. I managed to stand up and surf to shore – wooo. So I can now officially call myself a ‘Surfer’ right?

On the second day the currant was super strong. The waves were much bigger – about 4-5f.  It took forever to get out. The currant had a strong pull to the right – as times I could barely walk. So it wasn’t as easy to catch a good wave, a bit messy for beginners, but I still enjoyed every minute. 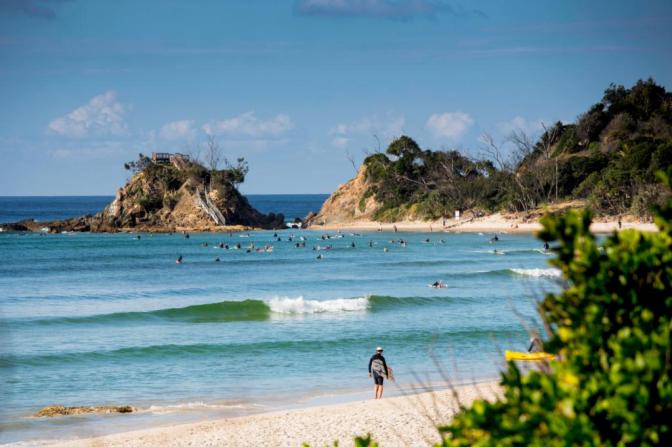 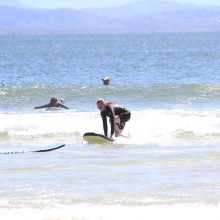