So for Christmas I thought I would book a weekend away for Jules and I, given he is always wisking me off to amazing places.

I thought, what better way to bring in the New Year and out One Year Melbourne Anniversary than camping under the stars, in the Great Otway National Park, sitting my a camp fire, drinking beers (Jules), sipping on some Sparking Shiraz (Becky), eating some local cheese and biscuits, listening to some chilled out tunes, playing cards and toasting some marshmallows over the fire pit. Dreamy!!

I did a fair bit of research, trying to book somewhere reasonably price for NYE, as everywhere hikes their price by about 4x over. And Wonkey Donkey cabins in Forrest was the chosen destination – with a load of mountain bike tracks nearby, I had high hopes. 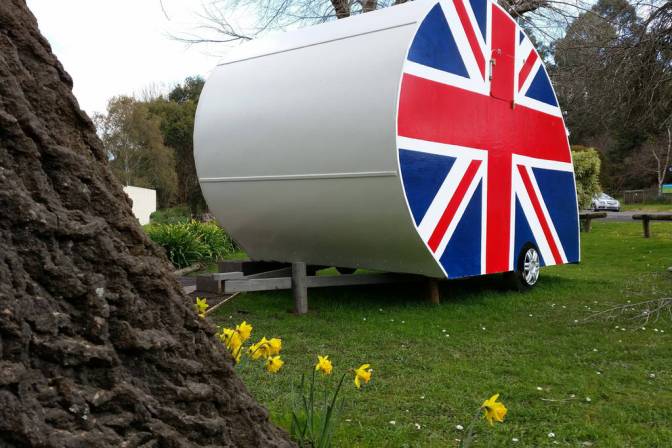 SO after driving down the Great Ocean road, stopping at some beaches, cafes and pubs for  cheeky beer before we headed off to our accommodation for the night.

When we finally got to our destination – it seems I should have maybe planned this a little better and done a bit more background research. In short….

It was a caravan park, not a camp site. It had no BBQ area or camp fires. The toilet area and showers could do with a good scrub down and the majority of people who were staying there could have been extras from The Hills Have Eyes.

The reception area was closed, my phone had died, Jules had no signal and the pub opposite wouldn’t allow us to use their WIFI so we could access my email, get the key code to the cabin and at least see what it was like inside.

So we had to drive 40mins back to Lorne to get some signal. We finally managed to get the code, but after chatting about it, we didn’t really fancy spending NYE in that environment after all. We tried for about 1 hour to book somewhere else, but everything was booked or cost over $400 for one night.

So we drove 3 hours back to Melbourne.

And arrived about 11pm. Just in time to crack open the Vino, bust open the cheese and watch the fireworks over the city from our rooftop terrace. Disaster averted.