WOWZERS. Its above 40c here today. Its not super sunny but everything is hot. The air is on fire. Seriously my eyeballs are even hot. And considering we do not have any air-con in the house, Jules and I went on the hunt for things which we could do where we could keep cool. So we headed to South Melbourne Market and the City’s Malls – AKA air-conditioned oases on hot days.

After a quick breakfast at Degraves Street (the usual poached eggs and avocado), we ventured over to South Melbourne Market.

With a reputation as one of the best markets in Melbourne, the market is also one of the oldest and most authentic – its been running for over 135 years. There are over 144 stalls all under-cover, with multiple butchers, bakers, grocers and fishmongers. 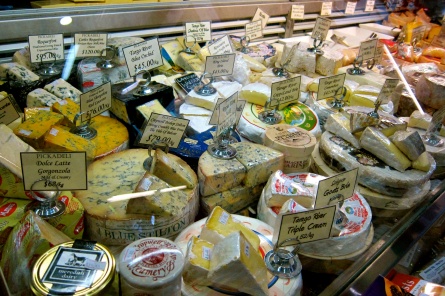 After the market we headed straight for the air-conditioned oases DFO (a factory outlet mall) for some bargain hunting, not much to write home about but we were cool and that is all that matters. I seriously do not know how any female can attempt to look attractive in that heat. I donned all my anti sweat gym gear and still looked and smelt hideous. I would like to think it was because I am not yet acclimatised. The native female apparently can deal with this heat – still donning a full face of makeup, sleek hair and non-sweaty, fashionable clothes. One day…. One day….

Observation of the day:  I thought the UK was bad for variable temperatures. It was only 23c yesterday and now 40c. After a Google I have found that Melbourne is famous for temperatures that may soar past 100, then drop to 60 within an hour as a front comes through. Its not unheard of to have ‘four seasons in one day’. This is not what I signed up for……..

Today’s Finds: Loads of local, fresh produce from South Melbourne Market. I have visions of me becoming a super cook, rustling up delicious tasting recipes using all these amazing ingredients (I doubt this will ever happen but I can dream right?).

Animal Watch: The only thing I saw today were animal carcasses 😦