Whoooo, so I have finally finished work for the Christmas holidays. The office shuts down from 22nd December to 3rd January so I get a good chunk of time off to chillax and enjoy the festivities. Plus a few extra days so I can celebrate my little sisters birthday.

Jules and I headed up to see Kerri in Albury NSW today (20th December). She has managed to land a luxurious pad over Crimbo, whilst looking after a veterinary surgery. 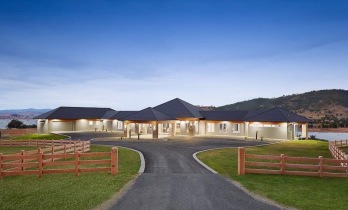 Jules and I stopped at Rutherglen en-route. The area is particularly noted for its sweet fortified wines. We stopped off at Campbells Winery and Stanton & Killen Winery. I sipped a fair few glasses of Shriaz and Fortifieds – Muscat, Topaque and Tawny. We brought a few bottles and headed over to Utopia (this is actually the name of the house, no pun intended) to set up camp for the next 10 days.

The next day we were up bright and early to go and play golf at Black Bull Golf Club, a relatively new golf course on the Murray. It’s a challenging course with wide sweeping fairways and plenty of bunkers plus water hazards all strategically positioned to capture any wayward shots. Jules lost about 7 balls!!

The Bull Ring is a testing little section comprising the 4th, 5th and 6th holes. I had a super challenging downhill putt on the 4th hole, which Jules was certain I was going to miss, at about 4 meters out (thanks for the encouragement hun!). I took my time, lined it up nicely and BOOM straight in the hole. Putt of the day taken early on. I finished with a score I was super chuffed with and I only managed to loose 1 ball vs Jules 7. 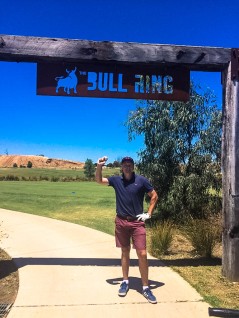 That evening we just chilled by the pool, sipped vino and cooked up a storm on the BBQ.