If you head out of our accommodation and swim left for about 5-10mins, you swim away from Halik and to Turtle Point. Needless to say, you see a lot of turtles here among the corals.

We saw 5 turtles today, two swimming through the ocean, which we followed for someway and three others just dosing on the ocean floor.

In the afternoon, we decided to hire paddle boards. Much harder than it looks folks. The sea was super choppy so neither of us could stand up for long. I had only been in the water for about two minutes and nearly got taken out by a dive boat full of people. Head on collision with the front of the boat. Very embarrassing. After that incident I resorted to sitting and paddling.

>He did make a few more attempts after this epic fail, also nearly getting taken out by a spider boat. I was laughing so hard I didn’t realize that the seas current had also moved me into the boats path. I ended up having to lie face down on my board in fits of laughter to avoid being taken out by the wooden beams.

We battled as hard as we could against the currant, but only made it about 20 meters from the shop, where we tied our boards to a buoy and used it as a makeshift lilo.

On the plus side we did paddle board by turtles coming to the surface for air.

We decided to try and take a shortcut home, rather than cycling around the island, we went off the beaten track and on the dirt paths the ponies use. It was slightly darker than we had planned for. Most of the time I could only see about two meters in front of me. Needless to say, it was a very bumpy ride. A branch from coconut tree snapped as Jules cycled past and it crashed down behind him, seconds from taking him out.

We ended up going around in circles for a hour. Jules wasn’t happy (HANGA! HIT).

We were knackard when we got back, so just ate at our restaurant and played cards. 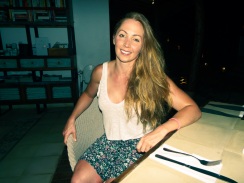