So this is part two of the massive update. I thought I would continue down the ‘highlights’ theme. So next up, three highlights from the past three months.  With no further ado.

So for those who have not heard about Ozzy rules – its such an odd game. I mean, when the ball goes off the pitch the referee takes a throwing BUT he has to throw the ball backwards? Australian rules football was invented in Melbourne by to drunk Ozzys (Joke, it was created in Melbourne though). It looks something like a mix between American Football and Rugby. I have no idea what the rules are but it was a fun game. We supported Carlton, mainly because it was 1) the first team Jules watched when he first landed in Oz ten years ago when the young whipper snapper went traveling the world and 2) because it was the first suburb we stayed in on arriving in Oz in 2016.

Never before has England played in a three-Test series in Australia – it was pretty big. We watched one of the games in the local pub. Jules went up to a few lads sitting around a large table and asked for a couple of seats, I was lagging behind and got stuck behind a group of 6 glamour clad girls to followed Jules to the table and sat down… the lads all thought Jules was like Henry the 8th with 9 wives. One of them nearly pinched my seat.

When England came to Melbourne Jules snapped us up tickets pronto. They were in AAMI stadium, which was dead cool as it can only fit 30k, so its very intimate. Plus it looks cool from the outside, with loads of little lights covering the roof (I cannot take any credit for the following images). 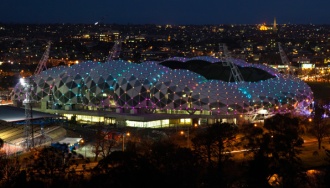 We were right on the Triline, sat three rows from the front, so we got too see all the action. It was a rough game, lots of fights between the teams, at one point one of the England team had his shirt ripped off him and they were all bundling each other (shame it wasn’t one of the fit players!!). The rugby team all came around the outside after the match – we kicked ass and won the Cup. 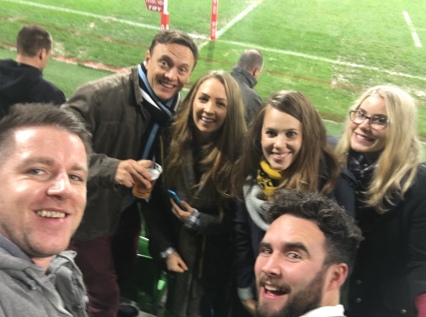 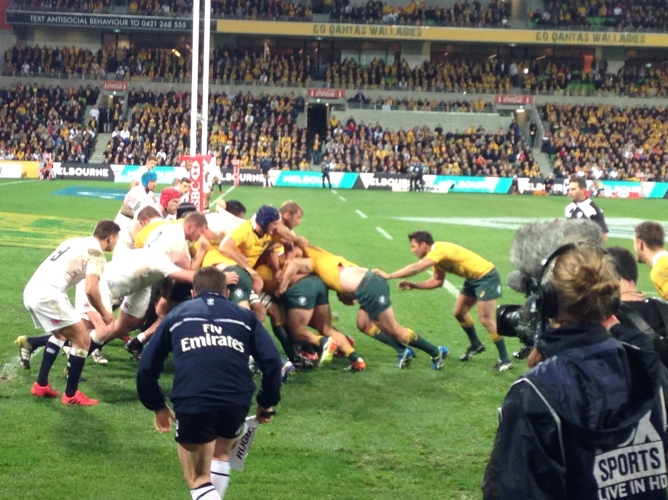 Having come to the end of this post I realise everything has evolved around sport…. What is happening to me? Right I need to go shopping, get my hair and nails done and get some femininity back into my life.

2 thoughts on “Part 2: Its been a long time coming”