Today we went to the Australian Open, Jules got tickets for me at Christmas and we were super excited as we got to see Andy Murray play. He won in “straight sets” (Jules is looking over my shoulder and told me this was the ‘correct’ lingo – its 3-0 for us tennis novices). We watched two other games also, including Ana Ivanovic (Jules is a fan of hers!). 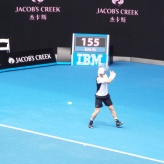 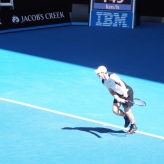 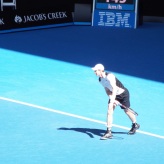 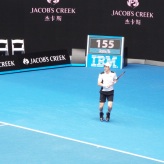 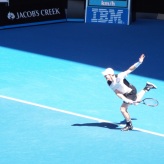 We were randomly walking the grounds of the tennis after Andy finished his game and found him having a warm down/training session with his coach on one of the outside courts. Was super cool to see him playing so close up – such a talented guy. 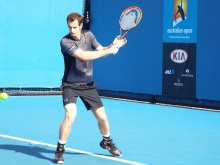 After we went to a cute Italian restaurant by our house called Tiamo, serving traditional, simple Italian dishes. I got the Chicken Parmigiana and Jules got a seafood linguini. Both we super yummy.

Observation of the day: They love a chant. So many groups of lads and even women chanting at the tennis. Jules said that he has never seen women chant at any sporting event he has been too. The ozzys were going crazy – all in fancy dress too.

Today’s Findings: Fans with water spray at the Rod Laver Arena. Saving grace in today’s temperatures. Oh and the cute Italian restaurant two blocks from us serving super yum pasta for about $18.

Animal Watch: Nothing to report today. I probably smelt like an animal after sitting in the sun all day, sweating like a pig.